Prior to the Folly Theater re-opening in 1981, one of the major renovations that was needed was to clear the 9.5 TONS of pigeon...well...doodoo. I promise you there's a point to that fact, so keep reading! On Wednesday, June 13th, we hosted our annual Volunteer Recognition Night...and WOW! It was truly a FIESTA! For those that may not know, The Folly is comprised of both staff, board, stage crew, and volunteers. Our Volunteers peak at just about 300 individuals ranging in age from their 20's to mid 90's! Our volunteers are an amazing group of individuals that spend their times helping with concession sales & ushering. Many of our volunteers work several events a month. It's with all that effort that we want to recognize and thank these amazing people that spend their own time with us.  This year's recognition was a fun Fiesta theme! We celebrated with over 170 of our volunteers. Of these volunteers they donated over 7,320 hours and worked 99 events! That's a lot of time! These are the nice ladies & gentlemen selling you cookies & coffee between the shows and the individuals that help guide you to your seats. Several of our volunteers have actually been with the Folly Theater since 1981 when the Folly Theater re-opened! These volunteers have amazing stories about their first time at the Folly and the amazing shows they've seen. After the tacos and churros were eaten up, we hosted the awards portion! Though everyone won some kind of Folly goodies, there are a few that we're very proud of and want to recognize. Andy McDonald, is both a volunteer, Usher Team Leader, and the Treasurer of the Folly Council (a volunteer group that helps raise funds and purchase items for the Folly Theater) was awarded Volunteer of the Year! Andy is known for his amazing organizational skills and dedication to the Folly Theater. We also honored Peggy Travers & Steve Wilhelm as Ushers of the Year. Both Peggy and Steve have been recognized by staff and our patrons as kind, helpful, and extremely engaging! We're so proud to call them our family here at the Folly Theater. Andy, Peggy, & Steve have all been with the Folly Theater as volunteers since it reopened in 1981. OK, So I'm sure by now you're still wondering about the 9.5 tons of pigeon poopoo. Here's the connection. To quote our volunteer, Volunteer Coordinator, Joan Hubbard (or Mother Hubbard, if you will);

So there you have it...We had several volunteers recognized with the Order of the Pigeon for going above and beyond...the call of duty!

The Folly Mourns the Passing of Larry Butcher 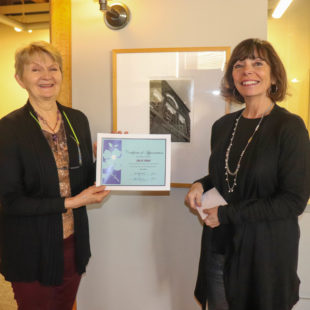